“….He had a way with women — The only way!’ Snappy Video presents Kipling’s Women (1961) a silly early 60s exploitation film attempted to sell itself as ‘The first American Art house film’ during an era of many European exploitation films coming to the United States. Produced by KBA (Long time exploitation producer Kroger Babb) and brothers Harry and Larry Smith, this film did decent business in the late night circuit at the time. The film stars Felix De Cola, known as ’The Piano Instructor to the Stars’ as well as Lisa Gordon, Virginia Rogers, Marge Sutton and Margie Fisco, who all appeared as ‘Pin-up’ girls in 50s and 60s Girlie magazines. “Very loosely based” on Kipling’s poem ‘The Ladies’, Tommy Atkins (De Cola) plays an unlikely playboy, moving from one episode to the next, with expected ‘art film’ removing of clothes. Note: This film is intended for a mature audience. It contains nudity and some (simple) violence involving a pretty fake looking stabbing. This BDR disc also features a still gallery of original posters and stills, with information on the cast. New digital transfer from a rare 35mm print. 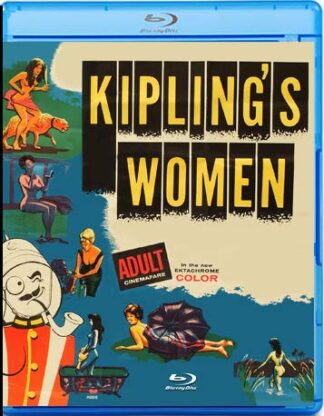