This special Blu-ray collection features a ‘pop in’ to Popeye’s career in animated films! Featured are classic shorts from the Fleischer Studios and Famous Studio, plus “Barbecue for Two” the original pilot for the first Television series. This set features new HD scans from original 35mm and 16mm prints, including a rare 1930s Technicolor print of “Popeye Meets Sindbad’. Best of all, this set is chock full of bonus features, including a new HD restoration of the 1939 Popular Science short featuring the making of a Fleischer Popeye cartoon, still galleries and rare interviews.
Cartoons on this collection:
Little Sweet Pea (1936)
Popeye Meets Sindbad (1936)
I Never Changes Me Altitude (1937)
Popeye Meets Ali Baba (1937)
The Paneless Window Washer (1937)
A Date to Skate (1938)
Me Musical Nephews (1943)
Taxi Turvy (1954)
Insect to Injury (1956)
Popeye For President (1956)
A Haul in One (1956)
Nearlyweds (1957)
Barbecue for Two (1960) 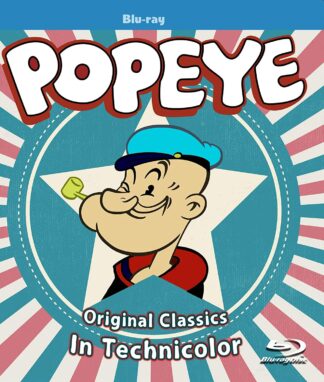