The teens and 20’s brought about a revolution in Western interest and exploration of previously hidden cultures, unfamiliar to the ‘civilized’ world. Magazines, newspapers and films began extensive coverage of these forays into the unknown world, resulting in many classic films such as NANOOK of the NORTH (1922) and GRASS (1925) . The film industry, always quick to develop stories from popular subjects, began featuring exotic locales and exploration frequently, with Cannibals of the South Sea Islands becoming a staple in comedies and cartoons.
During the golden era of animation, every major American animation studio produced multiple ‘Cannibal’ Cartoons, with nearly every major character at some point being subjected to a pot of boiling water and spears.
Understandably, many of the these films have vanished from the public sight over the years, due to their subject matter as well as the often racist imagry they contain.

Be the first to review “Uncensored Animation 2: Cannibals!” Cancel reply 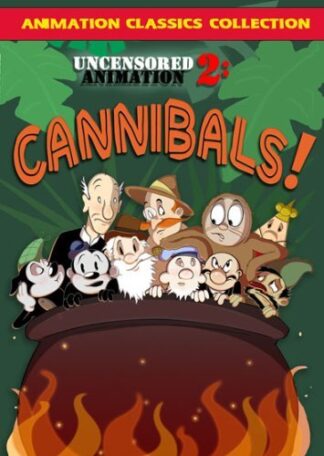