Snappy Video presents ‘The Phantom Planet’ (1961) a fun and sometimes campy Sci-Fi film from 1961. Captain Frank Chapman (Dean Fredericks) is sent on a mission to discover a series of recent lost ships in space, and finds himself shrunk to six inches and on the astroid planet of Rheton, put on trial by its tiny inhabitants! Will Frank Chapman ever be able to leave the planet? Will be fall for the beautiful Liara (Coleen Gray) or the more plain but also beautiful mute Zetha (Dolores Faith)? Will jealous Rheton inhabitant Herron (Anthony Dexter) beat him in the Duel? Will he help Sesom (Francis X. Bushman), the leader, battle the Solarite invasion?

All these questions will be answered along the way!

The Phantom Planet is presented courtesy of Snappy Video in a new digital scan from a rare 35mm print, digitally cleaned up for this new edition. BDR disc. 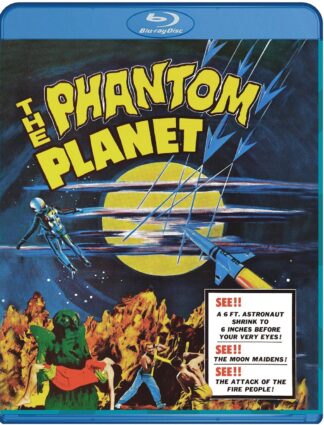