The Complete Animated Adventures of The Little King

The Little King cartoon series was made by the Van Beuren Studio in 1933 and 34, based on Otto Soglow’s popular comic strip creation. These charming and nearly forgotten shorts are inventive, funny and entertaining, featuring great animation and musical scores by Gene Rodemich and Winston Sharples.

This special collector’s edition ‘Official’ replicated Blu-ray features the complete series, including the pre-Little King Sentinel Louie cartoons, plus Fleischer Studio’s 1936 Betty Boop cartoon featuring the Little King, restored from the best available original 16mm and 35mm film prints from collectors and archives around the world. This set has been in progress off and on for five years and is finally coming together. We anticipate a summer release. Pre-orders will get a special bonus disc featuring raw scans of the cartoons from various source materials. 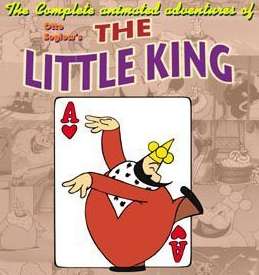 You're viewing: The Complete Animated Adventures of The Little King $16.95
Select Options