Cultoons, Volume 2: Animated Education There are many famous cartoon characters we know and love, but what about the ones that didn’t achieve great success? What happened to the animated advertisements and educational films? Many of these animated gems have been lost to time, often abandoned and forgotten. Not Anymore! The CULTOONS collection gathers these rare gems together, most unseen by the general public since their creation.features more strange and lost cartoons. Titles include: Finding his Voice (29, Fleischer) Family Album (30, Terry/ Audio Productions) A Desert Delimma (30, Cy Young/ Audio Productions) Out of a Milk Bottle (30/34, Jam Handy) See How they Won (35, Iwerks) Once Upon a Time (36, Audio Productions) 3 Blind Mice (45, Ottawa Film Board) Winky the Watchman (46, Hugh Harman) Nursery Rhyme Films (48, Bernie Wolf) Swab Your Choppers (UPA, 1948) Accident Prevention Aboard Ship (UPA, 1951) Discipline Pays Off (1951) Bonus features include sheet music from Once Upon a time, Commentaries by Mark Kaulser, Milton Knight, Jerry Beck, Stephen Worth, Mike Kazeleh and Steve Stanchfield.

Be the first to review “Cultoons, Volume 2” Cancel reply 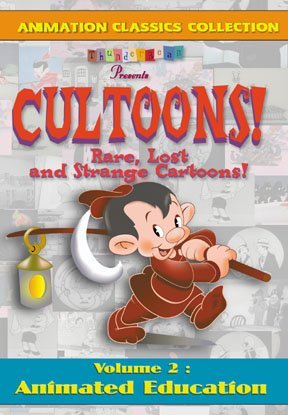