Now for the first time available on Blu-ray!
What would happen if the goofiest soldier in the Army went face-to-face with deadly Axis forces? You’re about to find out!

The hilarious Private Snafu cartoons hold a unique and unusual place in the history of American animated films. Originally produced as part of the Army/Navy Screen Magazine, they remain the most entertaining series of shorts never intended for general audiences!
The series was conceived by Frank Capra, with many early entries written and supervised by Ted Geisel (Dr. Seuss)! The Snafu shorts feature some of the finest 1940s work of the Leon Schlesinger studio (Looney Tunes), including shorts by directors Chuck Jones, Friz Freleng, Frank Tashlin and Bob Clampett. Over sixty years since the last of the series was produced, they remain fresh, entertaining—and outrageous!

Thunderbean wraps them all up in a special collector’s edition, beautifully restored and remastered almost entirely from original 35mm elements, newly digitally restored in HD, with many elements rescanned from the earliest existing generation materials. This Blu-ray edition includes 34 shorts; 26 Snafu shorts, plus all eight of his appearances in the “A Few Quick Facts” sister series.

The Special Features have been updated with new material, and include a four-page illustrated booklet about the films and their creators, still galleries featuring rare original production art, original Scripts and Storyboards, notes from the field about Snafu,rare ‘making Snafu’ footage, and commentaries by cartoon historians Mike Kazaleh, Jerry Beck, Eric Goldberg, Mark Mayerson and John Kricfalusi. At ease! 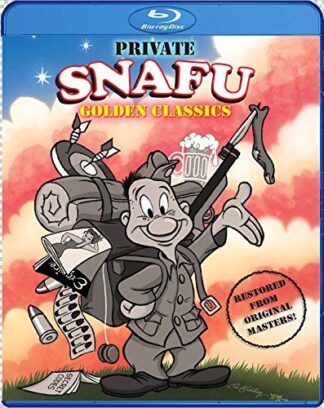