Explorers of the World

Snappy Video Presents “Explorers of the World” (1931). A fascinating compilation feature film comprised of footage from six major expeditions  from 1917 through 1931. This almost never seen documentary is some of the first (and only) footage of various regions and tribes- and gives a real sense of what explorations in the late teens and early 20s were like. Included are the Stoll-McCracken Siberian Arctic expedition, Borneo and Bali expeditions by Gene Lamb, African expedition by James L. Clark,  the Imperial-Trans-Atlantic Expedition under the guidance of Lieutenant Commander J. R. Stenhouse, the Byrd Antartic Expedition, shot by Dr. Laurence E. Gould, and the Tarlano Ethnological Expedition of the Amazon River by Harold Noice. The film is hosted by these various explorers, as noted filmed in “The jungle of skyscrapers that is New York City.” It’s understandable why this film was (and is) rarely seen, considering the nature of some of the footage, including whaling, capturing a leopard (with ropes), killing a walrus, man-driven Elephant fights (with fighters on back) as well as various remarks on natives of various countries.  New digital HD scan restored from a rare film element; presented in its original aspect ratio and available for the first time on Blu-ray (or perhaps any home format). BDR disc.

Be the first to review “Explorers of the World” Cancel reply 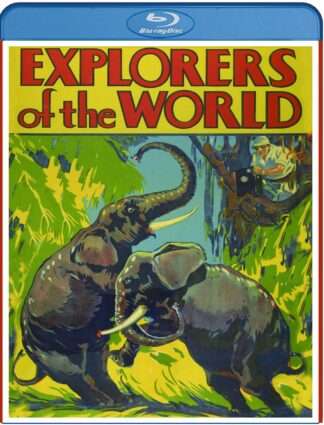 You're viewing: Explorers of the World $15.95
Select Options